Wow! Today’s trip was just awesome. We headed south for a change (we had been making our way north to Jeffrey’s Ledge most days for the last two weeks), and we spotted two blows- one was noticeably taller than the other. We moved a little closer and began watching a mom and calf humpback pair- Milkweed and her calf. It wasn’t long before both whales moved in close and spent time just under the surface next to the boat. From there we were treated to extremely close looks, some flipper slapping a few yards away, and multiple spy hops from both mom and baby. The spy hops especially are a behavior that we don’t get to experience often, and it is so amazing to watch these wild animals choose to come in for a closer look at us.

Milkweed and her calf alongside the Hurricane II

We spent a full half hour watching these two whales watching us, and then they began to swim a bit farther away. We had heard reports of other humpbacks in the area, so we traveled on to see what else we could find. We watched another mom and calf pair- easily recognizable as Nile and her calf, and were treated again to close looks at these two! From here, we could also see a few other whales about a mile away- it’s great to know they are sticking around for a bit longer before migrating south. 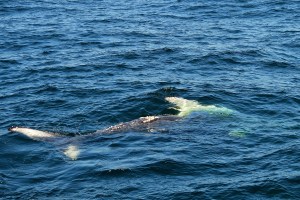 Sometimes young whales like to lay belly up beneath the water!

I sometimes get the question if the calves we see have their own names. The general rule is that for the first few years of a calf’s life it is referred to by its mother’s name and year of birth (for example Nile 2014 calf and Milkweed 2014 calf). If these whales are to return and are spotted again, they will then be named using the guidelines of naming the whale after a mark on the whale’s fluke. We have had some very, very special trips with Milkweed and her calf this year, and today was another to add to the list!

As if trying to predict the whales’ movements and follow them as they continue to feed on fish before making their migration south, we have also had weather to deal with lately. Strong winds have kept us at the dock for much of the last week, but we were finally able to see some whales by the weekend! Just to show how much of a difference a few hours can make, Sunday’s trips were completely different from one another. We had heard reports of whales to our north, however the seas were just too rough for us to head in that direction. By the afternoon, however, the winds had died down and we headed out of the harbor hopeful.

We were treated to a wonderful experience with a young humpback, who stayed at the surface for almost the entire time we spent with it. Much of that time, the whale circled the boat, turned on its side, and swam right toward us. It’s amazing to think of these animals becoming curious and wanting to take a peek at us. 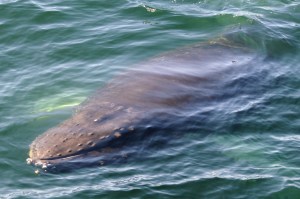 As the humpback rolled onto its side, we noticed a lamprey attached to it. We don’t see these on the whales often.

An unusual sight- a lamprey attached to the whale just behind the pectoral fin.

Rolled over on its side- the pectoral fin is to the left, the eye is the spot in the middle, and the fluke is just breaking the surface on the right.

We moved our boat very little throughout the entire trip- we really didn’t need to! So imagine our surprise when a large basking shark surfaced a few hundred yards away. We had some great looks at the shark, including watching it turn toward us and swim downward before making our way back over to the humpback. 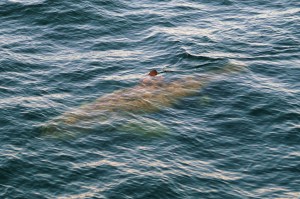 The basking shark turns before diving deeper into the water.

In addition to these two species, we had brief looks at a minke whale and harbor porpoise on the way out, and watched a gray seal in the harbor before making our way to the dock.