Finally, we get to go whale watching!!!

There were so many whales on our first trip! We started with a little humpback that surfaced near the boat a couple times. The next whale we saw was a minke whale that breached about 10 times as we approached. Then we saw a humpback named Chevron (first seen in 2004) breaching and flipper slapping. While we were waiting for Chevron to surface, we noticed some Northern gannets that were feeding like crazy. (They are my favorite birds to see in the spring because when they feed, they just drop out of the sky and dive into the ocean.) While watching the gannets diving, we noticed two fin whales that kept surfacing where the birds were. Then out of nowhere, two Atlantic white-sided dolphins surfaced next to the boat. It was surprising to see only two because Atlantic white-sided dolphins typically travel in larger pods. After a few minutes though, we ended up with a group of about 50-60 dolphins spread out over a big area amongt the finners and gannets. The prey must have been moving quickly because the birds had flown farther away before long. We could see that they were still feeding and the whales were still surfacing near them.  As we headed back to land, we ended with looks at two humpbacks–one with a recent scar–not sure what from. I believe that whale was Draco and the other whale that was seen was Sundown.

We look forward to getting out there again soon. Enjoy some pictures! 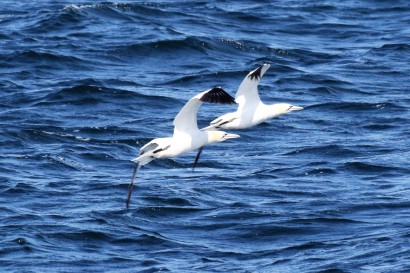 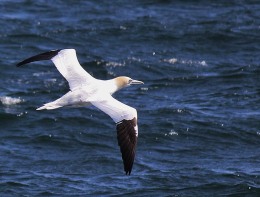 We love whale watching!! It’s like a holiday when the season starts! We all come out of our hibernation and become a crew again. It’s such a great time of year. As I was driving to Gloucester today, I was bummed by the rain drops on my windshield. I had looked at the weather and it looked like we would be in the clear for the trip, but the rain hadn’t stopped yet. Luckily, by the time we boarded all the passengers, the rain had stopped. The sun even made an appearance by the end of the trip!

Despite the overcast conditions, if you went whale watching on Saturday, consider yourself spoiled! We saw everything! First mother calf pairs of the year, close to boat, breaching, feeding, dolphins, lunge feeding fin whales (in the distance). It was truly awesome. One of my favorite parts was the fact that by the time we were ending our time with whales, the wind had dropped off so much that you could hear blows over half a mile away. I would hear a blow, and when I looked up, I was surprised how far away the whale was. And literally every direction that you looked, there were blows. Lots of whales out there.

Some of the humpbacks we saw were Tornado and calf, Echo and calf, Komodo, Lavalier, and others that we haven’t ID’d yet. There were at least 10 humpbacks. 4 fin whales, over 100 dolphins spread out over a large space. We saw a couple of gannets also.

We had Echo’s calf breaching and really flying out of the water! 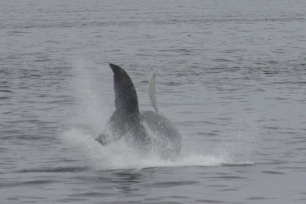 I love the second one where it’s literally entering the water head first. This little whale also fluked up a couple times so we could see the neat marks on the underside of it’s tail.

I can’t wait to get out there again. Hope they stay in the same place–Northwest corner. Here’s to a year ending in “6”. ’96 and ’06, whales were amazing on the northwest corner 🙂

We have had a busy summer and the sightings have been awesome. We have watched a variety of animals, including the three most common species we see- minke whales, fin whales, and lots of humpbacks! We have also been very, very lucky with lots of surface behavior. We never know when the whales might breach, roll over, or interact with the boat, and we enjoy it every single time. We had one awesome interaction with a juvenile who spent over an hour checking out the boat- rolling over, spyhopping, and looking right at us.

We have also been seeing a few whales who, unfortunately have come into some back luck. We watched Mogul, a 29 year old whale for about two weeks on Stellwagen before he moved on to Jeffrey’s Ledge. The next time we saw him a few weeks later, he had a small propeller scar across his back. Owl is another whale who has a mysterious injury on her left dorsal and flank. There have also been a number of reports of entangled whales. Hopefully these animals will be able to make full recoveries.

In addition to whales, we have also been lucky enough to see not one but two sea turtles- a loggerhead on southern Stellwagen and a leatherback on Jeffrey’s. We have also had a number of sea birds throughout our trips, including shearwaters, Wilson’s storm petrels, and northern gannets.

One day we found at least 5 ocean sunfish- we eventually kept driving when we saw a fin so that we could reach the whales! 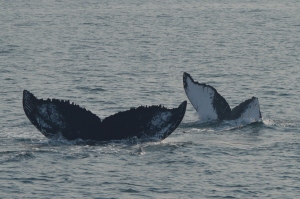 Owl’s injuries from a ship strike 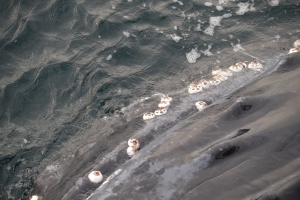 One of our favorite days was spent with a young humpback (possibly Nile’s 2014 calf), who spent over an hour engaging with the boat

Sea jellies are another species we see occasionally 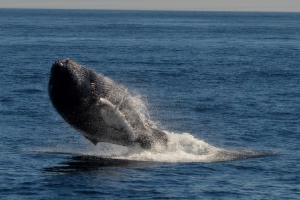 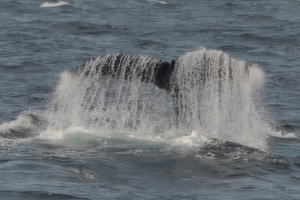 We have been traveling up and down Stellwagen Bank to see whales lately, including the ‘regulars’ as well as newer whales. Spoon and her calf continued to highlight many of our trips, with the young whale showing us often how acrobatic he can be. We have also had a couple of close encounters when the pair decided to visit our passengers up close and personal. The feeding frenzies that we had been seeing  have died down a bit, but we have been treated to a number of days of intense and exciting surface activity- everything from flipper slapping to full breaches.

During both of our trips on Saturday, July 25 there were a few instances that the whale surfaced so close it startled us. They exhale at more than 100 mph- such a powerful sound coming from these 45 foot long animals certainly takes you by surprise when you are not expecting it! The number of whales sighted on our trips has varied from one or two to more than 15, but I can honestly say that the number of whales doesn’t make a trip better or worse than another, just different.

As always, it will be interesting to look back over the course of the season to see where the whales spent most of their time. There is nothing predictable about it- sometimes it appears that whales might stay in an area due to the amount of food available, and sometimes they appear to be traveling, however our predictions are only educated guesses. Let’s hope the weather remains warm for a while and enjoy the whales while they are here! 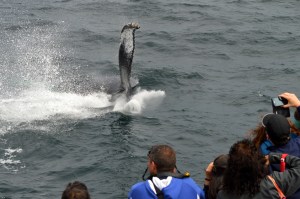 Bayou tail breaching off the bow

This whale was very, very small, and we wondered if it might have become separated from its mother 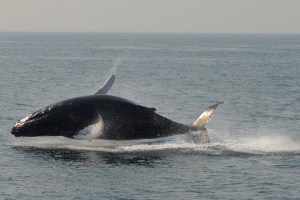 It spent our entire trip active at the surface- calling out to other whales?

Adult breaching on a sunny day

A harbor seal pup who stopped by to say hello

For the past couple of weeks, we have had great trips but have had to do some searching to locate the whales. Even with a bit of a longer ride, we have been able to see a number of different behaviors including logging (sleeping) and observing the whales feeding beneath the surface from bubble clouds at the surface.

During the middle of the past week we found a whale on the northwest corner of Stellwagen- much closer than they have been. We wondered if this was a whale passing through the area or an indication that we might start to see the whales move north a bit. By Saturday the whales were back on the southern end of the Bank, and stormy weather kept us at the dock all day Sunday. We were surprised by a report Monday morning of about 20 humpbacks on the northwest corner. We left Gloucester very hopeful, and 16 miles out were not disappointed! We watched at least 10 humpbacks, with a number of others in the area. Open mouth feeding, mom and calf pairs, surface activity- we had it all! We sure hope they will stay in the area for a while.

Humpbacks interacting with another group during bubble feeding 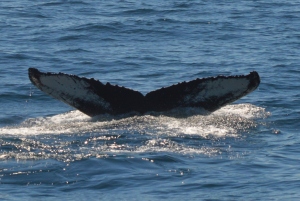 The whales have been shifting around a bit lately, and we have had some long rides over Stellwagen Bank. Each day is also different from the next, as we have watched anywhere from 1-15 whales on a single trip, including the three main species we see (minke, humpback, and fin). Many of the humpbacks that we have seen have been unfamiliar individuals, with a number of juveniles, including Flamingo’s and Mostaza’s 2014 calves. Flamingo’s calf is a whale that appears to be well-known throughout the area, as there have been multiple reports of this whale interacting with boats and their passengers. Our experience meeting him/her was no different, with the whale circling the boat, rolling and laying lazily at the surface.

My favorite sightings recently have been a mother and calf fin whale pair that we have watched a couple of times. It is uncommon to see a mom and calf fin whale pair, and we don’t know if there is a designated breeding ground for this species or where they spend their time at different times of the year. One young calf was very surface active two days- the first time we watched this pair the calf breached out of the water, and the second it lunged as it was swimming, creating a huge splash each time it surfaced. 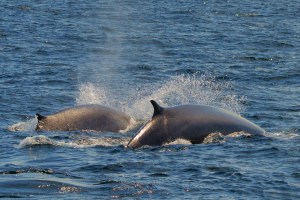 In addition to the whales, we also had an amazing encounter with two young seals. These two swam right up to the boat and played along side of us with each other, but what was amazing was watching them look at the different people on the bottom deck!

It has been another great week for sightings. We have spent each trip covering different areas of Stellwagen Bank, and have had some amazing experiences with these whales. There have been a number of individual humpbacks sighted, including whales that haven’t been found to frequent the area. In addition to adults, there have been a number of calves who have arrived with their mothers for the season. Some of the whales we have spent some time with include Zebra and Rapier and their calves, Tear, Etch-a-Sketch, Pinpoint, Evolution, Glyph, Dancer, Blackbird, Bearclaw, and Geometry. 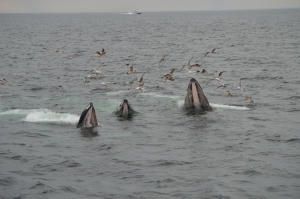 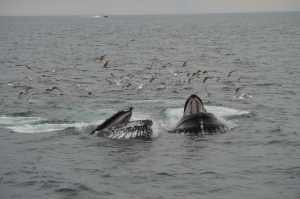 Two whales lunge up through their bubble net

In addition to many hungry whales, we also had a wonderful experience with a curious and playful juvenile. As we approached the whale, it seemed to be lazily moving at the surface. It approached a patch of seaweed and began playing with it, a behavior called kelping, and one we rarely see! Humpbacks are believed to have sensitivity to touch, especially at the rostrum where we find tubercles that hold hair follicles. This whale continued to play in the weed until it decided to come check out the boat.

Rolled over about to make a splash 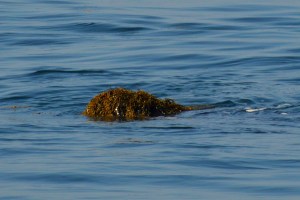 A look at how whales can be flexible

Other sightings include basking sharks, gannets, seals, and a quick peek at a small pod of dolphins swimming among feeding humpbacks. 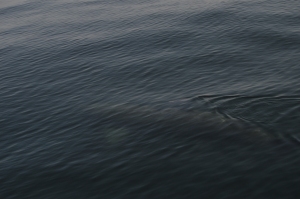 One of three basking sharks we watched in one trip!

An awesome look into the mouth