It has been another great week for sightings. We have spent each trip covering different areas of Stellwagen Bank, and have had some amazing experiences with these whales. There have been a number of individual humpbacks sighted, including whales that haven’t been found to frequent the area. In addition to adults, there have been a number of calves who have arrived with their mothers for the season. Some of the whales we have spent some time with include Zebra and Rapier and their calves, Tear, Etch-a-Sketch, Pinpoint, Evolution, Glyph, Dancer, Blackbird, Bearclaw, and Geometry.

Two whales lunge up through their bubble net

In addition to many hungry whales, we also had a wonderful experience with a curious and playful juvenile. As we approached the whale, it seemed to be lazily moving at the surface. It approached a patch of seaweed and began playing with it, a behavior called kelping, and one we rarely see! Humpbacks are believed to have sensitivity to touch, especially at the rostrum where we find tubercles that hold hair follicles. This whale continued to play in the weed until it decided to come check out the boat. 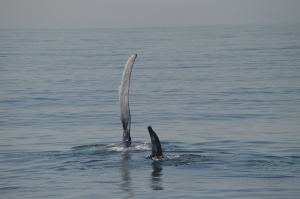 Rolled over about to make a splash

A look at how whales can be flexible

Other sightings include basking sharks, gannets, seals, and a quick peek at a small pod of dolphins swimming among feeding humpbacks.

One of three basking sharks we watched in one trip!

An awesome look into the mouth

The trips so far this season have been great… and each different from the others! This week we have seen a number of different individuals in the area, including an old favorite Mars, Ase, and Thumper, as well as a few mom and calf pairs- Palette, Spoon, and Prongs have all returned to Stellwagen with babies this season. We have seen a bit of feeding behavior from the adult whales each day this week. One of my favorite experiences of being out here is “getting to know” these whales and their feeding styles. I am thinking of Palette in particular, who we’ve seen slapping her chin at the surface, kicking her tail, blowing a ring of bubbles, and then coming to the surface to feed. We are also lucky to be able to watch the calf as he/she plays while Mom eats.

In addition to humpback moms and calves, we were also lucky enough to watch a fin whale mom/calf pair! We know very little about fin whale breeding grounds (if they have designated areas) or if the exact time of year calves are most likely to be born, and seeing this pair was a great treat. With fin whales reaching lengths of about 75 feet as an adult, seeing this ‘small’ baby swimming next to mom was awesome to watch.

We have also had the occasional sighting of seals, and also had our first basking shark sighting of the season. This particular shark stayed at the surface for a bit but seemed to dive down below the surface, so we began to move away. As we did, it suddenly resurfaced and then turned right toward the boat, giving us an amazing look right into the mouth! We are excited at the great sightings we have had lately and are hoping they continue as the season picks up into full gear.

Palette reaches the surface while the gulls hang back. 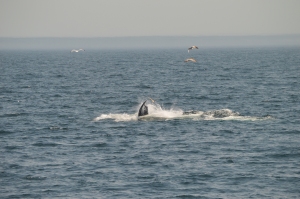 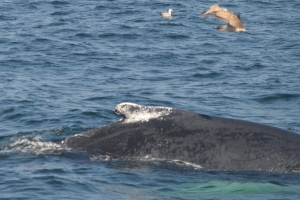 This whale had a really unique fluke pattern, and a dorsal fin that was mostly white on either side

Palette’s fluke amid the spray caused by her kicking motion 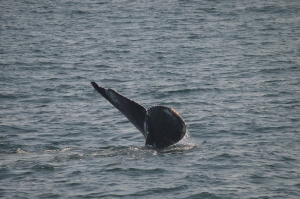 New mom (again!) Spoon, one of the whales that has been watched from both Stellwagen and the Silver Bank- humpback breeding grounds off of the Dominican Republic